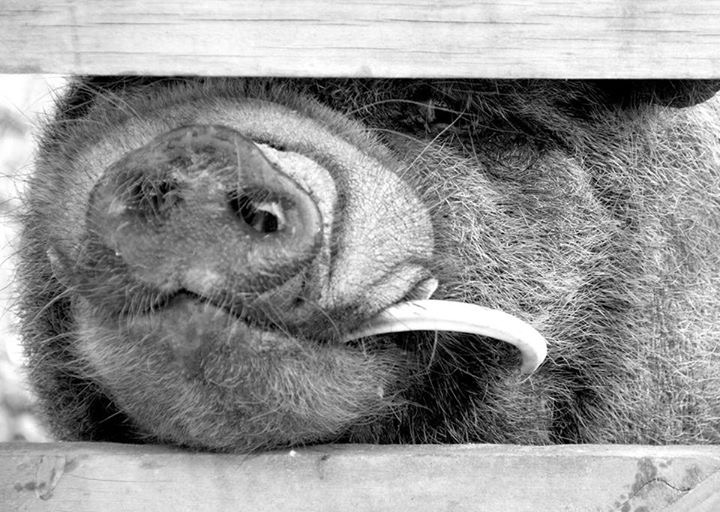 We are delighted to tell you that we now have 3 new little faces waiting to greet you, when you come to stay with us. As many of you already know, we already have two beautiful male Kune Kune pigs, Harry and Piglocks, which we rehomed from the RSPCA, and which are very cuddly!

However, towards the end of 2016, our younger son attended a 7 year old’s birthday party, at another farm. There we discovered 3 little piggies, who had been abandoned by the previous owners of the farm. They had been kept inside, in terrible conditions, and one, the female Kune Kune, we had to literally break out of her pen. I don’t think she had ever stepped outside to that point in her life. I cannot tell you of the palpable joy of watching them in their field, when we brought them home. I am pretty sure they had never seen grass before, or known freedom like it.

So we now need to introduce you to:

A very sweet girl, who has been kept alone all her life, until now.  When fed, she runs away with her food, to eat in secret, which is rather amusing. She is a female New Zealand Kune Kune pig. She has particularly large and noticeable decorative tassels under her chin, which wobble when she walks, making her even more comical. We don’t know how old she is. We were told she is blind by her previous owners – I don’t think she is – possibly partially sighted, but she finds her way around very well. 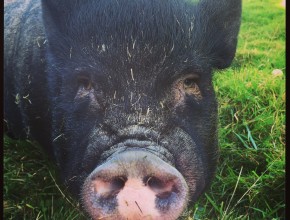 Sylvie, and her almost identical looking sister Evie, can be quite difficult to tell apart. We presume they are twins, as they are extremely close, and do everything together, always sleeping curled up in straw together. We don’t think they are very old – possibly 1 or 2 years old. The are what are commonly known as Micro Pigs, which are actually just small bred mixed-breed pigs – usually a Kune Kune x Pot bellied pig mix. They have longer snouts than the Kune Kune pigs, but are smaller. Their hair is also very different to the Kune Kune pigs, being a lot harder, rather like a yard brush! Sylvie is the svelter of the two sister, and friendlier. She can be a bit bossy to the other pigs, especially Ursula, despite being a smaller size! 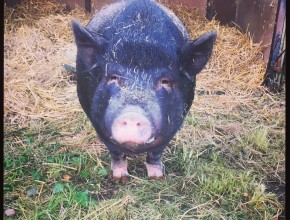 The shyer twin sister of Sylvie – she may come to you, but is less likely. She is slightly more portly than her sister, with a longer snout, which is narrower at the end. Both her and her sister came to us with very bad feet, which we are slowly trying to wear down, and get in to better shape!

None at the moment, check back soon!